Christmas Concert (Date to be confirmed) 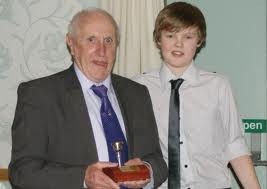 2012
Bill Baptie was the toast of the Weensland Function Suite when a celebration dinner was held to mark his 70 years of loyal support and dedication to Hawick Saxhorn Band.

The event was a very fitting and well-deserved tribute to Hawick’s very own ‘Mr Music’, and proceedings began with grace by Captain Steven Turner, Salvation Army, after which there was an excellent meal that included a piece of celebratory cake.

From the toasts to the singing of Michael Aitken to the playing of the Saxhorn Band itself, to the presentations, all the right notes were hit.

Helping the night flow along in the smooth way it did throughout was chairperson Joyce Tinlin.

And after welcoming the party of just under 100 who attended the dinner, Joyce presented a witty, clever and humorous ditty all about Bill that brought about great laughs and smiles. This went down extremely well and from here on Joyce chaired to perfection.

First to make a toast to Bill was bandmaster Greig Murray. And just like his band always is, Greig was in top form.

Covering a lot of ground in telling not only stories of Bill’s successful and golden road with the band, but crossing into other avenues as well, Greig stated that Bill was an all-time great.

He also spoke of Bill’s early days with the band, and how he was approached to join through an official letter when he was 11 years old. How he started off on third cornet, and of his first concert which was an outside event next to the 1514 Horse monument.

Greig went on to tell of how Bill had climbed the musical tree within the Saxhorn Band from his boyhood days, and of his many travels and experiences with his beloved band.

The band-master also touched on Bill’s working days as a mechanic at Braemar Knitwear, before he moved to become a tutor at the Henderson Technical College.

Bill’s wife of 57 years, Audrey, was also mentioned in the many tales told.

Concluding, Greig said that Bill’s extraordinary 70 years with the same band could well be a world record, and that this was currently being investigated.

In his toast, former bandmaster and now youth bandmaster, Rob Hume, took an interesting and different glance at Bill’s times with the band.Besides going through his 70-year association with the band in ten-year periods of what was happening in the world, Rob came up with some remarkable and interesting statistics.

Among them being that Bill had attended something like 5,600 rehearsals, and 2,100 band engagements.

Band muscial director Alan Fernie also made a toast in which he said Bill was an extraordinary bandsman. What a terrific influence he had on the band, and that his achievement of being with the same band for 70 years was unique.

Alan also mentioned how proud Bill was in having his two granddaughters, Chloe and Natasha, in the band with him.

A vote of thanks was given in fine style by past-bandmaster Ken Hewson.

Hawick’s official song-singer, Michael Aitken, delighted the audience with his first-class singing of numbers that had been selected by Bill.

The Saxhorn Band also emerged a massive hit with a well-received selection of tunes. This being highlighted by a solo on the soprano cornet by 12-year-old Harry Marshall, which was superb.

Bill, to his great delight, was asked to conduct the band for its last number.

George Burt, president of the Scottish Brass Band Association, made the first of what was to be several presentations to Bill and Audrey during the evening.

Bill, who is a real living legend, was thrilled with his celebration dinner, and told the Hawick News: “It was a wonderful night, and Audrey and myself loved every second of it. From seeing so many weel-kent faces to the way thing went, it was just superb.

“It was the first time that I have ever conducted the band in my life, so even at my age, something different and exciting can happen.”